WE MAKE STUFF UP

Nowhere else in Florida will you find a place like SAK Comedy Lab. Since 1991, our professional ensemble of improv actors has entertained audiences with our unique brand of live improvised comedy. We take your suggestions and make up characters, scenes and songs on the spot. Our comedy is fun and edgy for adults, but also widely enjoyed by our younger fans.

If you like the show “Whose Line is it Anyway”, you’ll like our show. In fact, SAK was a starting place for the careers of Wayne Brady as well as writers, actors and producers for “Mad TV”, “Saturday Night Live”, and sitcoms such as “Scrubs”, “The Office” and “30 Rock”. Check out our beautiful 250-seat venue, grab beer or wine from our concession lobby, and see the next generation of national comedic talent.

OUR HISTORY
SAK Theatre enjoyed its humble beginnings in Buffalo Minnesota when a troupe of four individuals with a background in evangelical street theater began performing at the Minnesota Renaissance Festival in 1977. After a few years, opportunities arose for SAK to perform at multiple festivals simultaneously. The original troupe trained additional performers and SAK grew from four to twelve.

In 1982, while performing at a festival in Largo Florida, entertainment scouts from the Walt Disney Company came looking for entertainment acts to populate the World Showcase at the newly opening EPCOT Center. SAK Theatre Company was now an official corporation and moved its base of operations to Florida.

For seven years, SAK produced, performed and managed live audience participatory comedy shows for Walt Disney World in the U.K. and Italy pavilions, as well as countless other shows performed in and around the parks. SAK also continued to appear at festivals, expos and fairs around the world well into the 1990’s, and was employing over 30 full-time performers, production and office staff.

In 1991 after the Disney contract ended, SAK Theatre Company opened the SAK Comedy Lab on Church Street in downtown Orlando. This first venue was a 99-seat comedy theater dedicated to performing original comedy plays (many developed through improvisation) and improv shows. It was at this time when the SAK signature improv comedy competition “Duel of Fools” was born. Every Friday and Saturday night for almost three decades, two teams of improvisers have battled against each other to see who could make up the funniest scenes, sketches and songs based on audience suggestions. It’s been a hilarious bloodbath.

Two venue changes and nearly 30 years later, SAK Comedy Lab still thrives in the heart of downtown Orlando at its beautiful 250-seat theater. Since its inception in 1991, the “Lab” has grown to become one of the largest theaters and training centers for improvisation in the Southeast. It currently serves over 50,000 patrons a year as well as major Central Florida organizations such as the Orlando Magic, Advent Health and Darden Restaurants with its team training and corporate comedy shows. SAK is currently experiencing unprecedented breakaway growth and looks forward to entertaining Orlando audiences for another three decades and beyond. 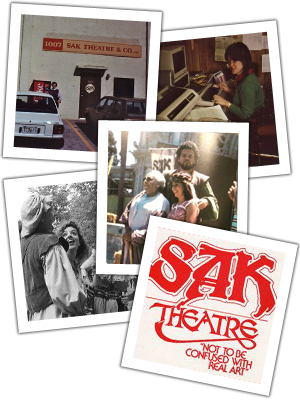 Wayne Brady
Wayne began improvising and teaching at SAK in 1991. He moved to LA in 1995, got very famous and won three Emmy's.

Paula Pell
Paula Pell performed with SAK during 80's. She's currently a writer of 16 years for "Saturday Night Live", and a screenwriter and actor on "30 Rock" and "Parks and Recreation”.